Ham sandwiches seem to have been around since the beginning of sandwiches.

Okay, that’s not technically true, but it does seem like when someone thinks of a “standard” sandwich, ham is one of the first to come to mind, isn’t it? That means there are endless possibilities of tasty sandwich recipes to be found out there.

Like chicken, it is an incredibly versatile meat. It has a rich and strong flavor, but it still goes with nearly anything. It’s great with savory, spicy or sweet flavors. Smoked, cured or baked, it is one tasty meat. It is awesome when sliced paper thin, cubed in a salad, or even in thick pieces from a roast.

What is the difference between ham and pork, you might wonder? Pork is the meat you get from a pig, but ham has been treated with salt, or a salt brine, and then cooked. That’s why ham tastes salty on its own. It almost tastes like a completely different meat than pork. That’s why it gets a category all its own.

Below are several recipes for you to try for ham as your main ingredient.

Well, this site has the best of all of those recipes, and more (except for that last one.) I hope you enjoy my favorites listed below. More to come soon.

Sarah Dawe 25 Recipes
Intermediate The Cuban Sandwich aka The Cubano The Cuban sandwich is a ham and cheese sandwich recipe that is very popular in Florida. Read More

Sarah Dawe 25 Recipes
Beginner Ham and Cheese Melt Ham and cheese melts are classic, easy and so tasty! They are related to the all-time-childhood-memory sandwich, the Grilled Cheese. Read More 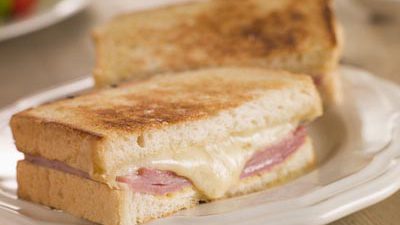 Sarah D. 25 Recipes
Beginner Ham and Cheese Melt Ham and cheese melts are classic, easy and so tasty! They are related to the all-time-childhood-memory sandwich, the Grilled Cheese.
To Top